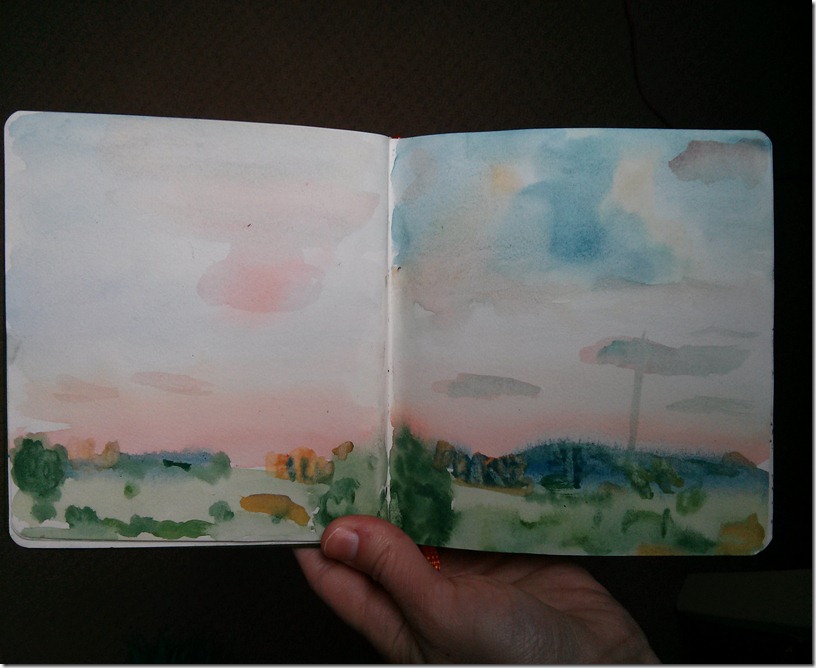 In the last two weeks I had to go to Spain for my granddad’s funeral. With no internet and/or shops in walking distance and no access to a car, I tried to do a few sketches of things around me just to keep drawing. They aren’t very impressive in my opinion and some worked more than others. I didn’t have a wide variety of media to chose from!

I don’t think this works very well at all as it’s messy and has awful line qualities, but thought I would include it anyway as you can vaguely see how the place looks

Again, these aren’t the best drawings of the bunch but I did like using the graphite and the rough textures I could make with it, I don’t often use graphite.

Like I said, this was very experimental and I don’t think it really works either as it is very sketchy and rough. That day was very windy so maybe some movement can be seen in the drawing through the rough lines.

I’m not very confident in using watercolour but I do like the roughness of this, It was also nice to paint over two pages instead of sticking to the one square. I was trying to show a sunset but this was actually pretty difficult as the sun sets so fast and the sky changes so much in a small amount of time!

Another attempt at the Landscape view from my grandmother’s window and probably my favourite sketch from the whole week. The charcoal I have seems to always look quite rough in texture, but I think this illustration of the landscape shows how gloomy it was that day.

Another area of the landscape similar to before where I was trying to paint the sunset. I don’t know if the sky and the mountains/ trees work together but there is something I do like about this. Maybe it’s rough aspect? I definitely need more practice at this!

I didn’t think this was a particularly good illustration but my family thought it was brilliant and I can’t really see why. For me, the mistake I made here was using the pen as it almost looks like an outline in places which I think can always kill a drawing and I always end up regretting! I think I caught the expression well and there is definitely a strong likeness to my dad which is probably why my family thought it was good, but I really don’t think this is very strong.

Here is an example of where the fine liner kills the illustration I think. I left the bottom half where the hands are without any line and I think this looks better. Proportion- wise the drawing is awful as the hands are way too big but really I was only playing around with the materials that I had.

This is rather random, I tried to focus on the photo of my nan and grandad as because of the circumstances it seemed to often catch everyone’s eye. This is why I only used colour and pencil here to draw attention to it and represent this. As said before this is really really rough and I was playing around with media and ideas still.

I was playing around with line here, I like the bottom right hand side of the piece with the bowl and bottle. Perhaps cropping this down to just this area would have improved the illustration. Apart from that this is really another sketch.

These pencils that I used were from a spanish discount store and were of awful quality which doesnt help the drawing but there are some aspects of it which I like. I like the simple use of colour and tried to include simplicity as well as a bit of pattern.

I just did these very quick sketches to see what it would be like to draw with one colour and a pencil. The left one is pretty bad but I think the softer use of line works a lot better, it looks nothing like my sister on my laptop!

I think the way the right page looks is interesting as I literally tried to draw with the watercolour. I’m not sure how I feel about the left, there isn’t much to say about it apart from it being a watercolour painting really which isn’t particularly special!

I tried to keep this very minimalistic and again ruined it by the use of graphite on the pylon on top of the  mountain! Despite this I quite like the simplicity of it.

I think I would like this if it weren’t for the badly drawn door handles. The watercolours also never seem very vibrant, then again the weather certainly wasn’t vibrant and was gloomy pretty much all week so I suppose this depicts this rather well.