It’s been over a month since I last wrote a blog post, and a busy month it has been! In this time I’ve handed in my last ever project as a NUA Illustration student, discovered that I’ve achieved a First Class Honours in BA Illustration and achieved a place on MA Children’s Book Illustration at Cambridge School of Art! On top of this I’ve been setting up for our degree show, updating my website and have been moving out of my house and back home for the summer which thankfully is over now. On Tuesday I officially graduate so I thought now would be a good time to reflect back on my experiences at NUA, good and bad, before I start working on new projects for next year. Hopefully this post will provide a brief overview of what the course involved when I was a student.

To begin, I began my first year as a Graphic Design Student! I had interviews for both courses as I was torn between which subject to chose. As my portfolio was very ‘graphics – heavy’ and probably because I was so nervous in my Illustration interview I was accepted onto graphics. Anyway I soon discovered that the subject wasn’t for me (nothing to do with the quality of the term on graphics) so in Jan 2012 I was transferred onto the Illustration course.

First year was quite daunting for me as I would worry in the back of my mind about the first term that I had spent on graphics and missed out on on illustration. My first project of first year was illustrating a book cover. The second was an editorial project where we picked a theme (I chose smoking) to illustrate the pros and cons of in 2 4x4cm square illustrations. The third was a sequential project where we had to produce a series of illustrations for a silent book if I remember correctly and it could be about anything. I ended up writing a story about a soldier’s life, a snippet of which can be seen below.

In first year we also had a lot of workshops we could sign up to like life drawing and various printing techniques ranging from etching to screenprinting.

Our final project, BA3 was my favourite project of first year based on creating a ‘Pop Up Theatre’. We had to pick a traditional fairy tale and change the story in some way. I chose ‘Sleeping Beauty’ and set the story in Africa. We had to create scenes of the theatre and photograph it considering lighting to set a mood. Below is a photo of my theatre where a witch casts a spell on Sleeping Beauty. 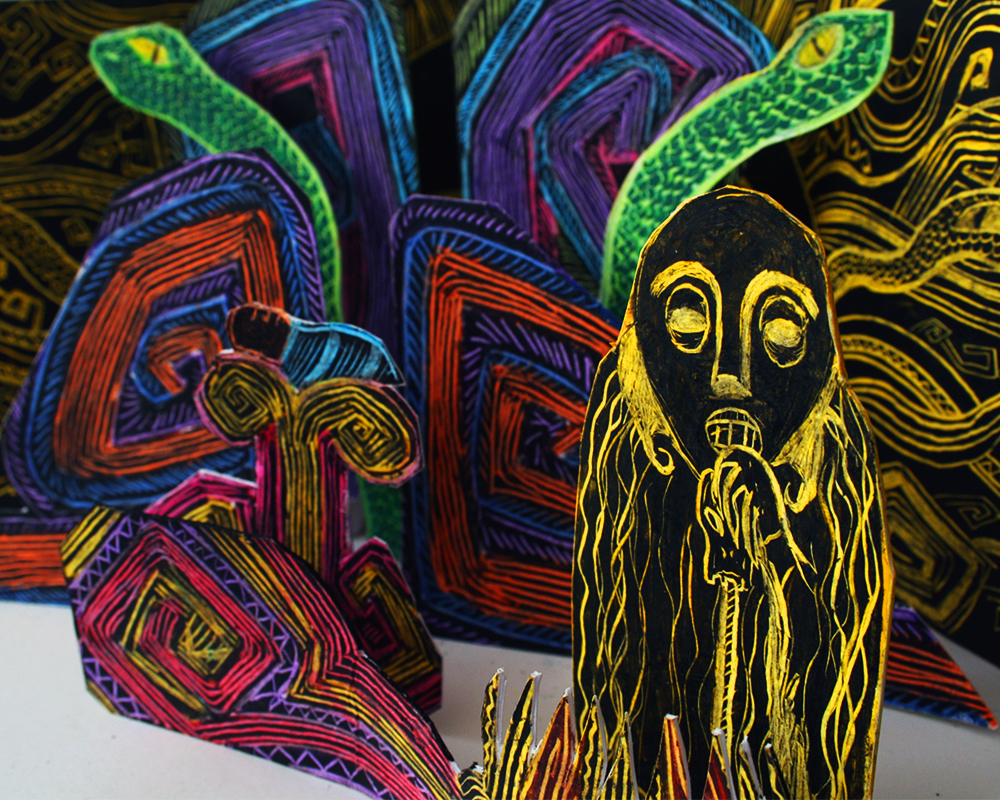 Second year began with a narrative project where we chose a short story to illustrate, producing a front cover and 4 inside pages for a traditional format book. For this I chose ‘The Prophet’s Hair’. I used the same oil pastel technique as the pop up theatre to create my final imagery but was perhaps too focused on creating a ‘style’ or look to my images than considering the composition and other elements I should have considered. An example of this can be seen below. 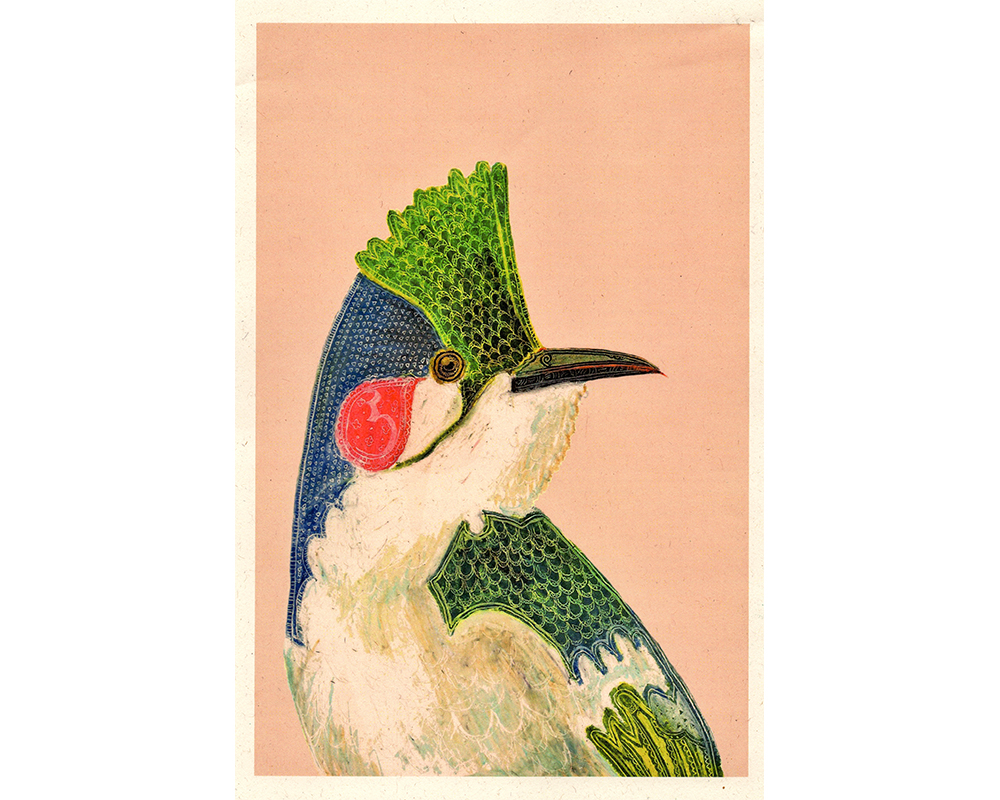 Having a ‘style’ is something that really worried me throughout first and second year and something which was only addressed in third year. I wish this had been addressed earlier as I’m sure I would have produced better work if I hadn’t been focused on it. Anyway, our second project, very different to the first was a reportage project based on our own choice as long as it was local and in Norfolk.

This began our second term of second year and I spent my first three weeks of the project in a local pub creating illustrations which I was really enjoying as I was making work I was happy with and got to know the owners well. 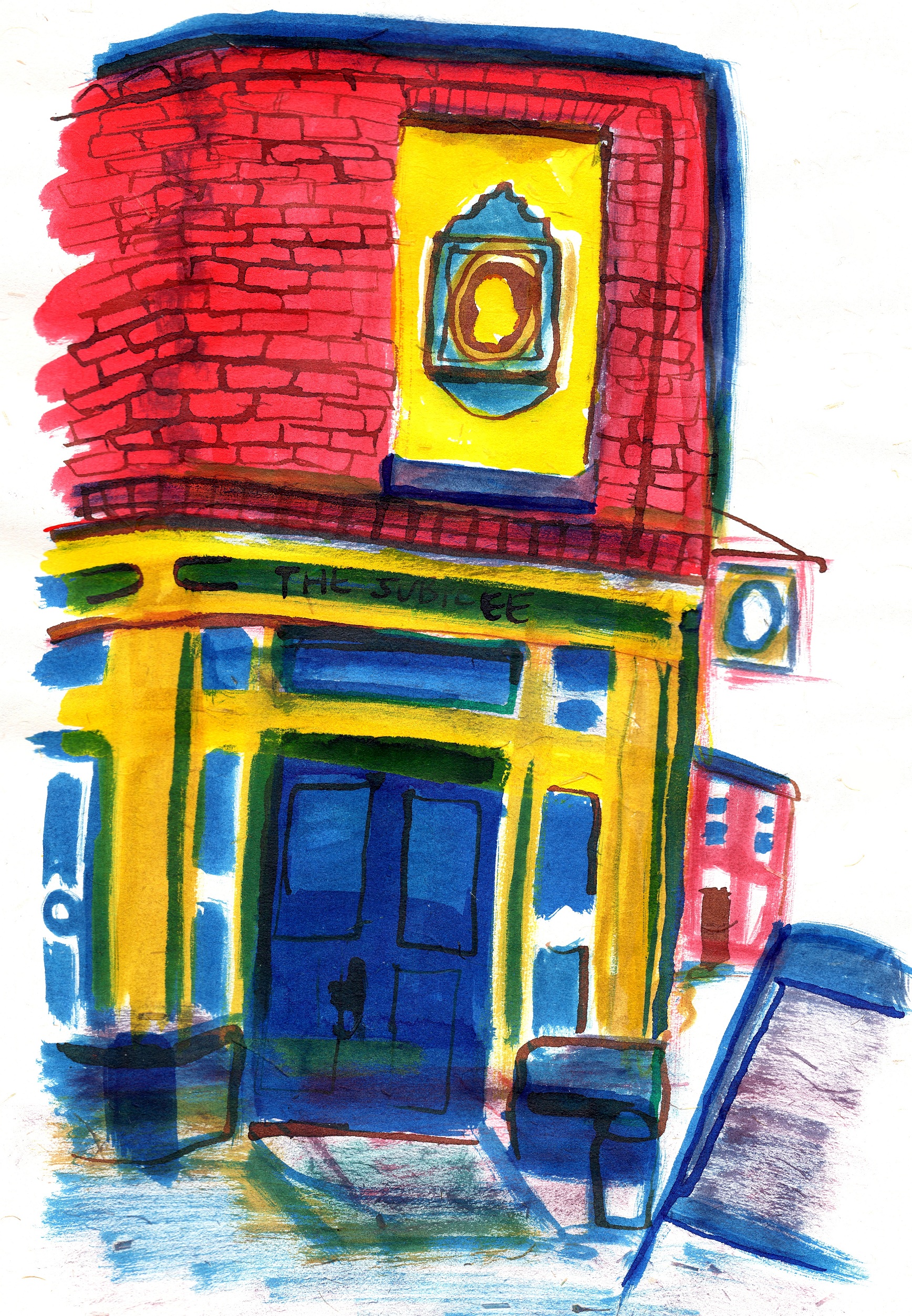 However, in the second crit for the project I was told I had to change my project completely as someone else had been working in the same pub on their project. I was pretty annoyed about this at the time as it seemed like I’d wasted my first few weeks on the project. I decided to now focus my project on a local Norfolk Brownie Guides group. 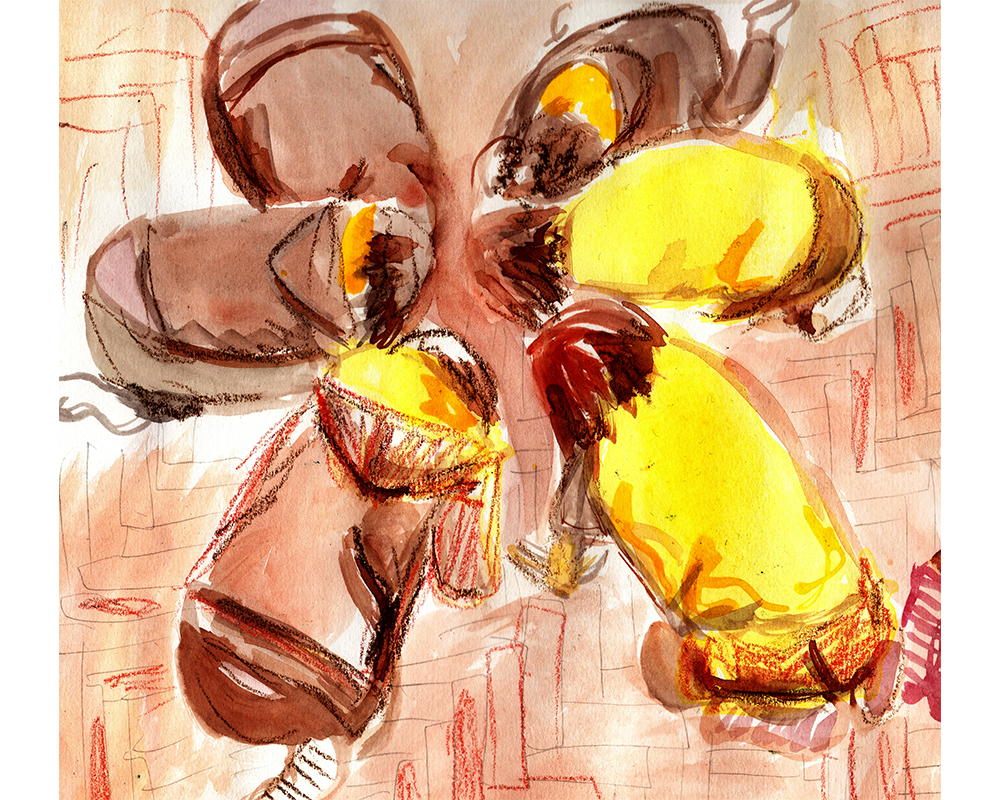 I had to get a bus every week to the Brownies group, taking my materials to sit and draw with. This was quite daunting at first as I wasn’t used to making work in front of strangers and certainly not used to drawing things which moved around! I created a sketchbook full of varied and experimental illustrations and pulled everything together in some concertina books at the end. I had been unsure about what I was aiming to produce for this project as an end product as it was quite open in what we could do. Overall I got my first ‘First’ for a project and was pleased with the end result. Working with the Brownies was a lovely experience too!

In the third term of second year we had quite an open brief based around Authorial Practice. For this I chose to illustrate ‘The Yellow Wallpaper’ by Charlotte Perkins Gilman. This was a short story I read in A Level for my coursework on feminism in English literature; one which had always struck me as something that had so much visual potential. This was a chance for me to be really experimental and in the end I created a set of photographs of a set of the room the story is set in. 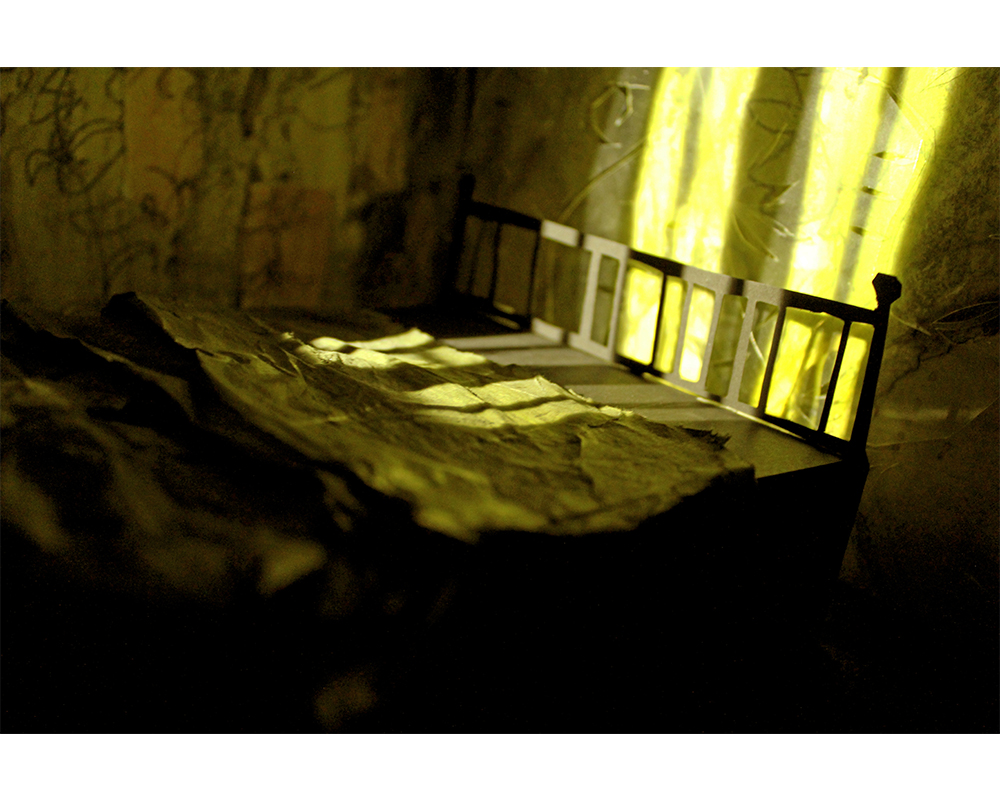 After this, third year began. We had two modules, BA7 and BA8 in the whole year. It was advised that both projects linked together or looked at the same theme and they were open briefs again. I was quite lost for a while on what to propose as a project. A lot of people chose to do competition design briefs and I tried to link my project to what I tried to achieve in the last: creating a visual response to a narrative- the novel ‘Flowers for Algernon’. This term lasted from October to December and was pretty short and very stressful for me as I’d set myself a very open brief and struggled to bring everything together. If I could give myself any advice it would have been to read as much as possible over the summer to start the term with confidence in what I was trying to achieve. 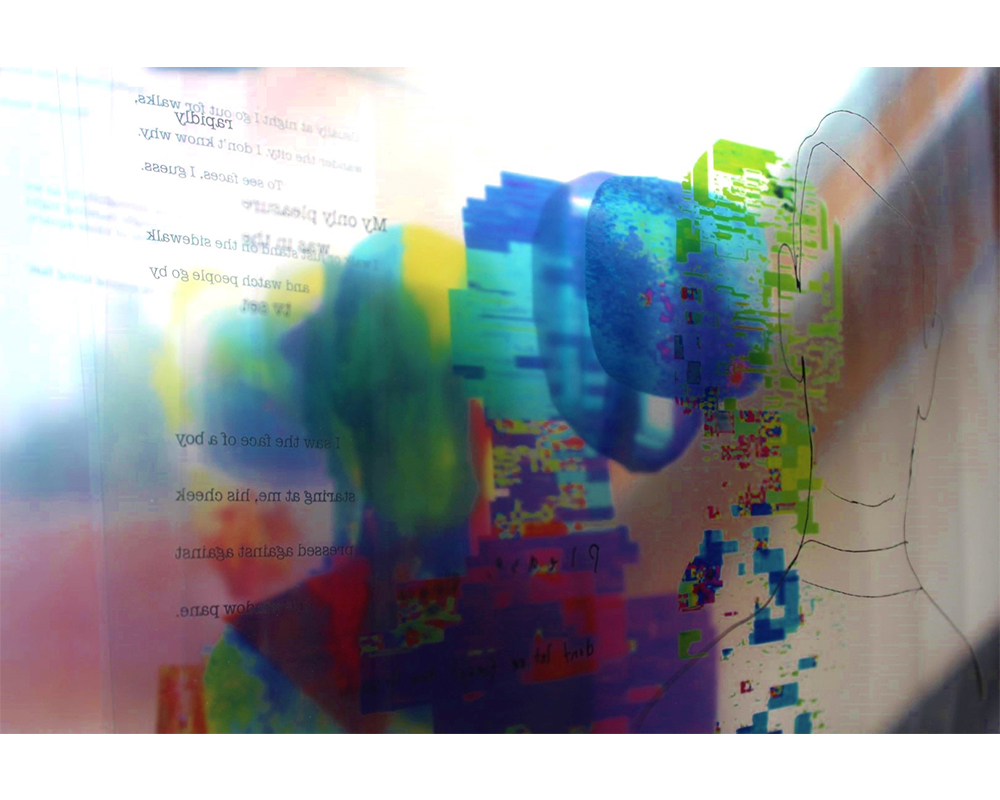 My final outcome is seen above and consists of imagery printed onto acetate which overlap to form the figure of the main character Charlie. Each image illustrated a quote or part from the story. Charlie is seen as always looking at life through a window which is something else the piece was meant to represent.

Moving on, my final project at NUA was a visual response to ‘The Color Purple’. I approached this in the same way as I approached BA7, the project before, in a very open manner. I think this made life a lot more difficult for me. I chose to illustrate the theme of quilting in the story and how it links to the structure. Quilt patches are torn from fabric and stitched together into something new which reflects the separate letters which form the structure of the novel. 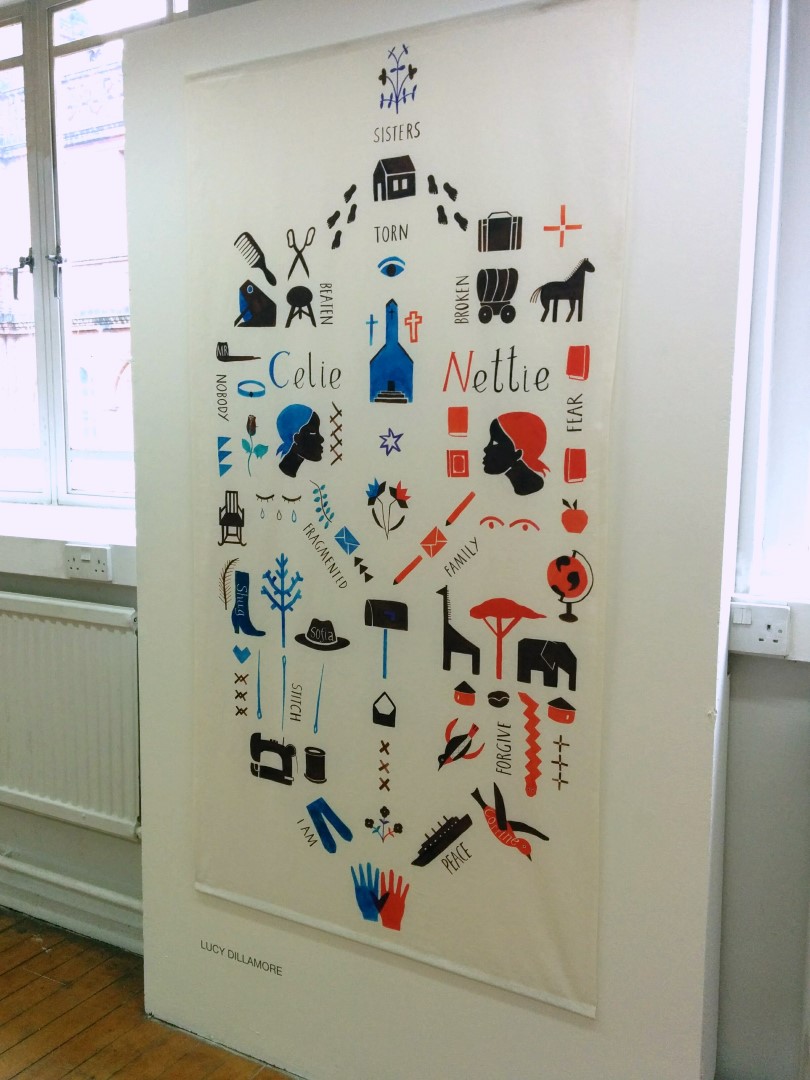 Above shows my final piece at the degree show printed onto fabric.

I’d found year 3 to be the most stressful of all years at NUA. Giving myself such open briefs was probably a reason for this. In contrast to my very open brief I took on a collaboration with a Graphic Design Student which ended up taking up a lot of my time, especially near the end of term which disrupted time spent on my project. Another collaboration early on in the term we all had to take part in was with UEA Creative Writing students. This took up a lot of my time also. Both of us had different ideas of what the collaboration involved so it turned out to be a very confusing experience.

Straight after this we had a few weeks left to hand in our dissertations. Mine was on a subject I found really interesting- ‘The Narrativity of the Frame’. Unfortunately, I did too much research and not enough analysis even though it was pointed out that where I had analysed my research I had made some good points. I hope to explore this much further in my MA which I’m really excited about!

Even though my third year didn’t go as well as I’d planned I still wouldn’t change my decisions or work that I have produced. I used this degree to really push myself and discover what illustration means to me which I’m happy about. If I hadn’t have done this I might not be at the position I am at now! I think the most important things I’ve realised are how someones work is and should be a reflection of them, their interpretation of the world and be what they enjoy doing, and not to focus on creating a ‘style’ to work, this will come naturally. I’m looking forward to the summer as a chance to do lots of sketchbook work and to begin my MA in September which I will blog more about shortly!