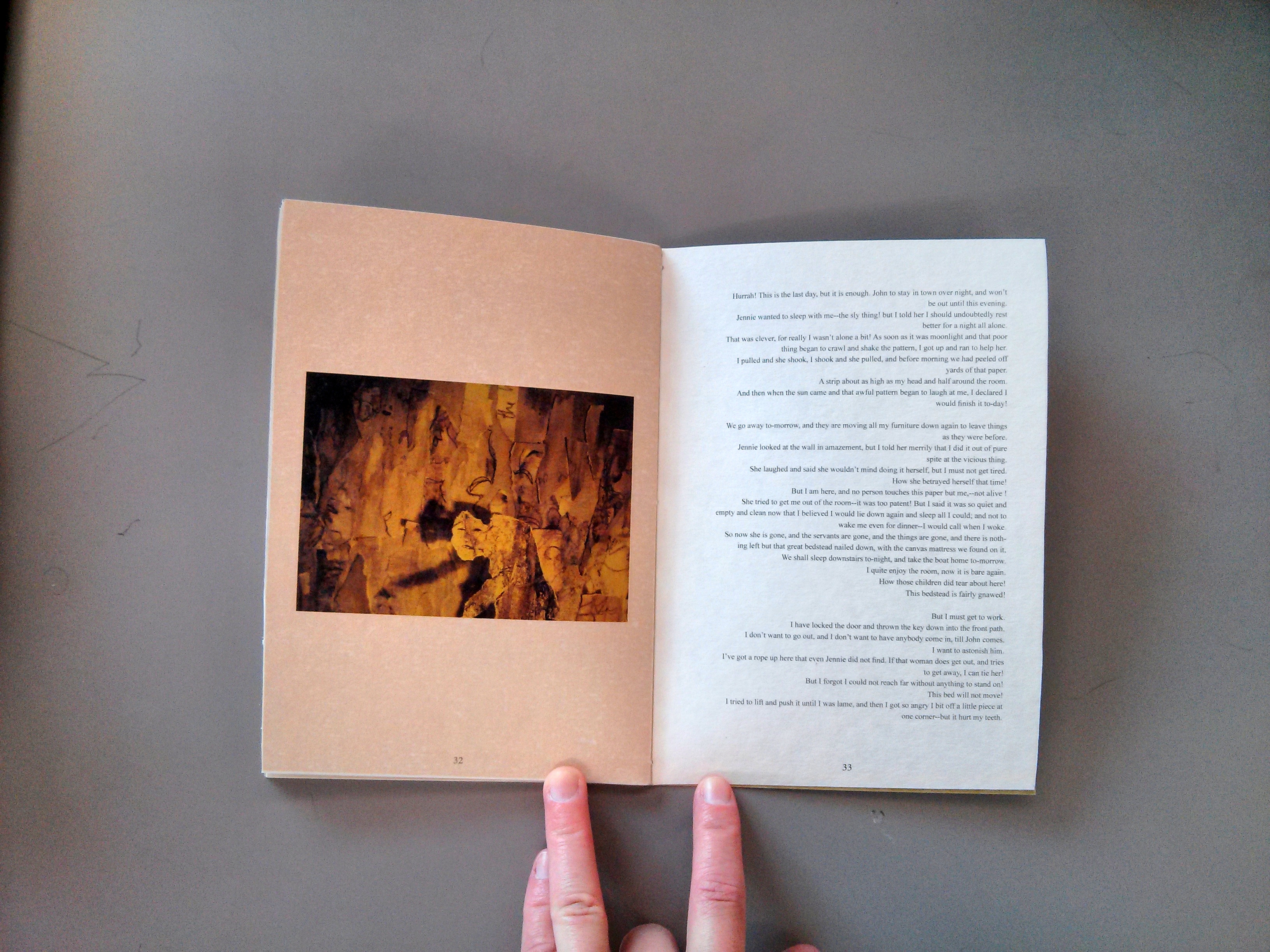 This has been another really beneficial term in me developing and improving my working practice. I started the term with ways I’d like to work; expressive, experiential and more organised – all of which I have tried to do to the best of my ability. Like any project I think I could have done even more with if I’d have had more time but am definitely happy with my body of work and outcome.

I chose to illustrate ‘The Yellow Wallpaper’ as it is such a weird, dark and descriptive story and one which I thought had a lot of visual potential. Throughout this term, something that helped me keep on track was constantly reminding myself of the key themes and mood I was trying to convey: loneliness, entrapment, madness, self expression, isolation and fear. This is something I will continue to do with future projects as I now see the importance of the themes coming through in the final imagery. At the beginning of the project I found myself struggling with my imagery after going through the book and discovering a lack of ‘physical action’ in the story- making it hard to illustrate in a literal way. Here I referred back to the key themes and things that appeared a lot in the book as suggested to me in our first review and tried to think less literally about the imagery and concentrate more on these themes.

Something else I began to think about was the passing of time in the book and the constant mention of looking out of windows, laying awake through the night and staring for hours on end. This was a bit of a ‘breakthrough moment’ with this project for me as I thought about how I could visualise the passing of time and thought about light through windows. It made me think of leaving cones outside and recording the shadow throughout the day in science at school. Perhaps a light through the window of the room could be the thing representing this passing of time. Before this point I had almost been going in circles, experimenting a lot with different media, creating expressive illustrations of the wallpaper and experimenting with the colour yellow, but this wasn’t really getting me anywhere. As mentioned before, I had tried doing some thumbnails of the story and struggled. With this ‘breakthrough’ I began to cut patterns out of paper and acetate, shining different lights through them, layering them up onto my more experimental pieces and projecting them to see what effect this would give to the wallpaper and whether it would make it seem more alive as mentioned in the story. I was doing a lot of experimentation with this before creating a 3d room with a single cutout barred window. I cut a character from previous expressive wallpaper illustrations and made a silhouette. I really liked this idea of the light as time passing so from here decided I would do something I would never usually do and work with 3d.

Shortly after this we had a workshop with the task of creating double page spreads. I ended up doing something totally random to see if it would spark any ideas, cutting up paintings of the wallpaper which I had done in the morning to create different perspectives of the room as if it was through the protagonist’s eyes. I really liked how this had turned out and it gave me the idea of focusing on different areas of the room at different angles in my final imagery. I continued to experiment with the 3d after this, changing the 3d room to make it more textured, dark and gritty and experimenting with various lighting effects (candlelight, daylight, artificial light, coloured acetate filters) as it seemed a little too ‘clean cut’ before.

Soon after this I went though looking at key objects and main characters to make from cardboard. This took much longer than I had anticipated so I decided to experiment more with lighting and with this came another ‘breakthrough’ moment! I took a photo of the chair in the empty room to play around with light and discovered that actually, this on its own was a great depiction of loneliness and isolation! From here I took a simple and far less literal approach as this was so much more effective! I decided to really try and visualise the images as if they were through the protagonist’s eyes, taking shots as if it was what she saw, staring at walls, looking at the windows etc.

In the end I was happy with my final imagery and the fact I had taken a risk and experimented with things I’d never tried before. Maybe the one thing I would change about them would be the quality of the images: the focus and making sure I took them at a high dpi. I accidently shot the images at a low dpi which could have been disastrous if the dimensions of the images hadn’t been so high. This is an example of how trying things I would never have tried before this term (photography, film) have made me learn different skills which will be really useful in the future. As for the image focus, I think it works well in a way being slightly out of focus as it fits the mood of the book better and perhaps if I shot at a higher dpi with more focus it may have been too detailed for the confusing and spooky mood of the story.

I tried to really edit and refine my final images when laying out prints for a book and am happy with the final outcomes. I felt like the book was a good format choice as prints on their own may be too vague for people to understand. I looked more carefully into book layout and design this term and tried to think about what sort of layout would showcase the imagery and have learnt the importance of contrast in images: I tried to make sure I used some very close up images and some images from far away. 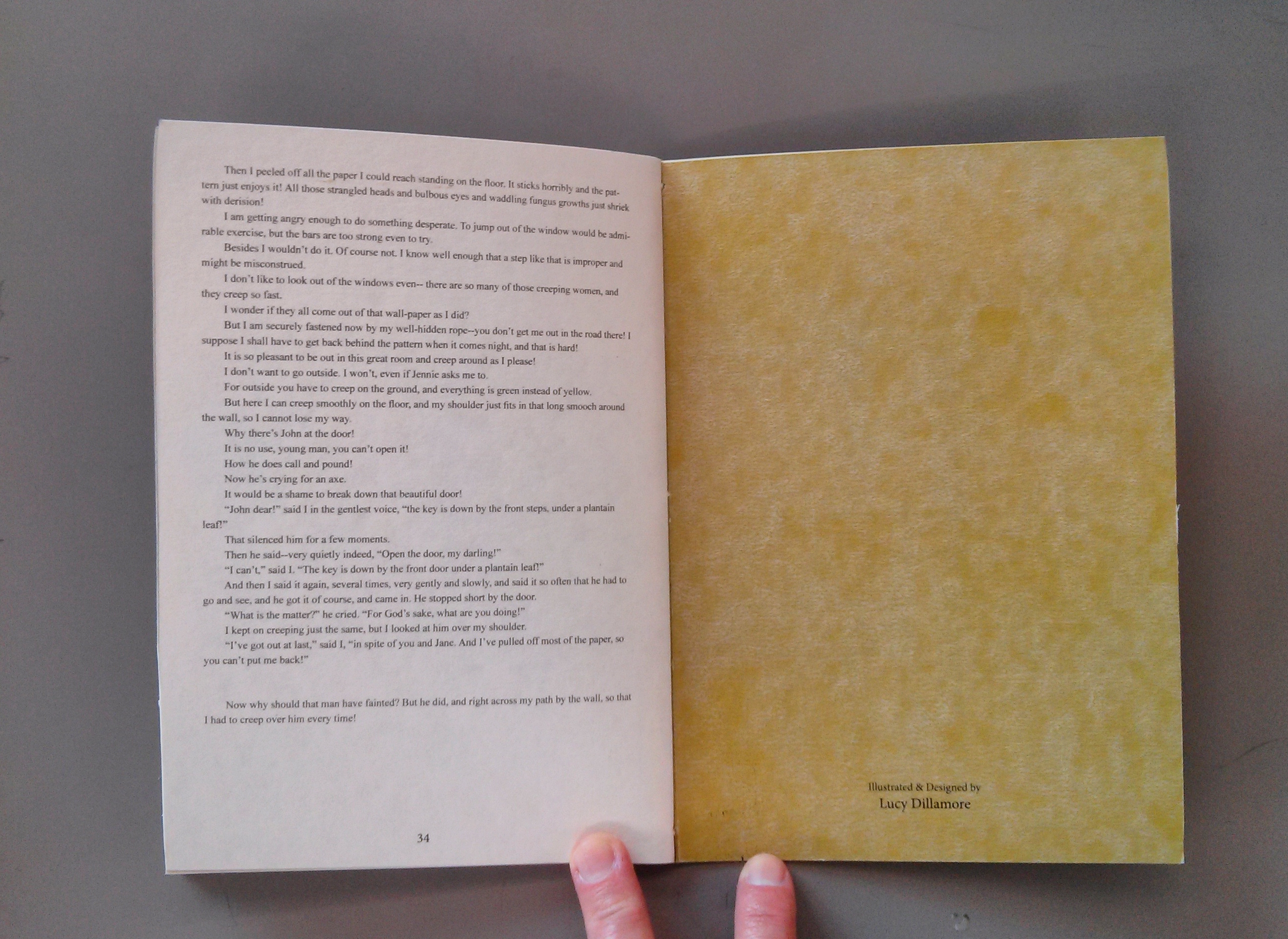 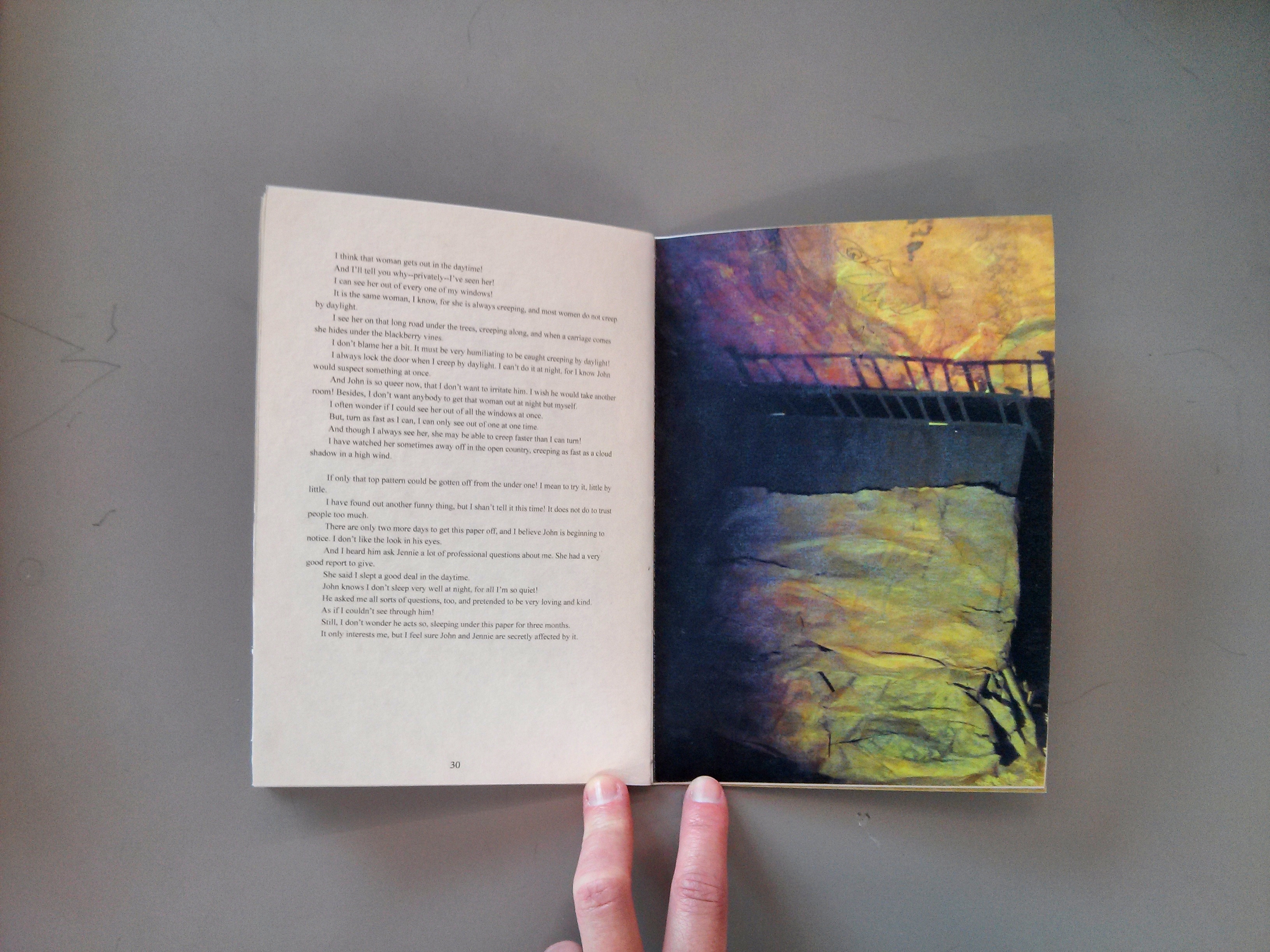 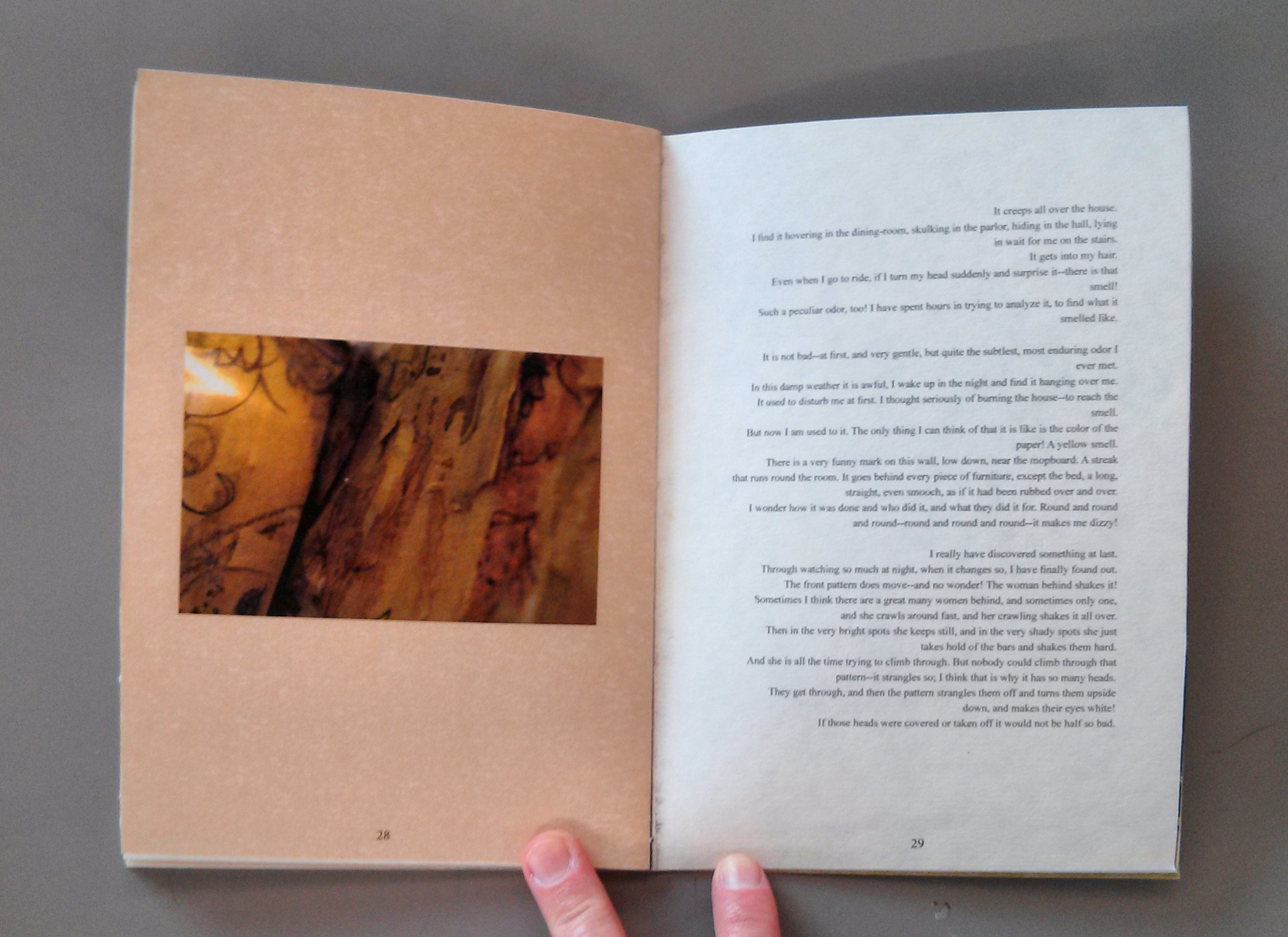 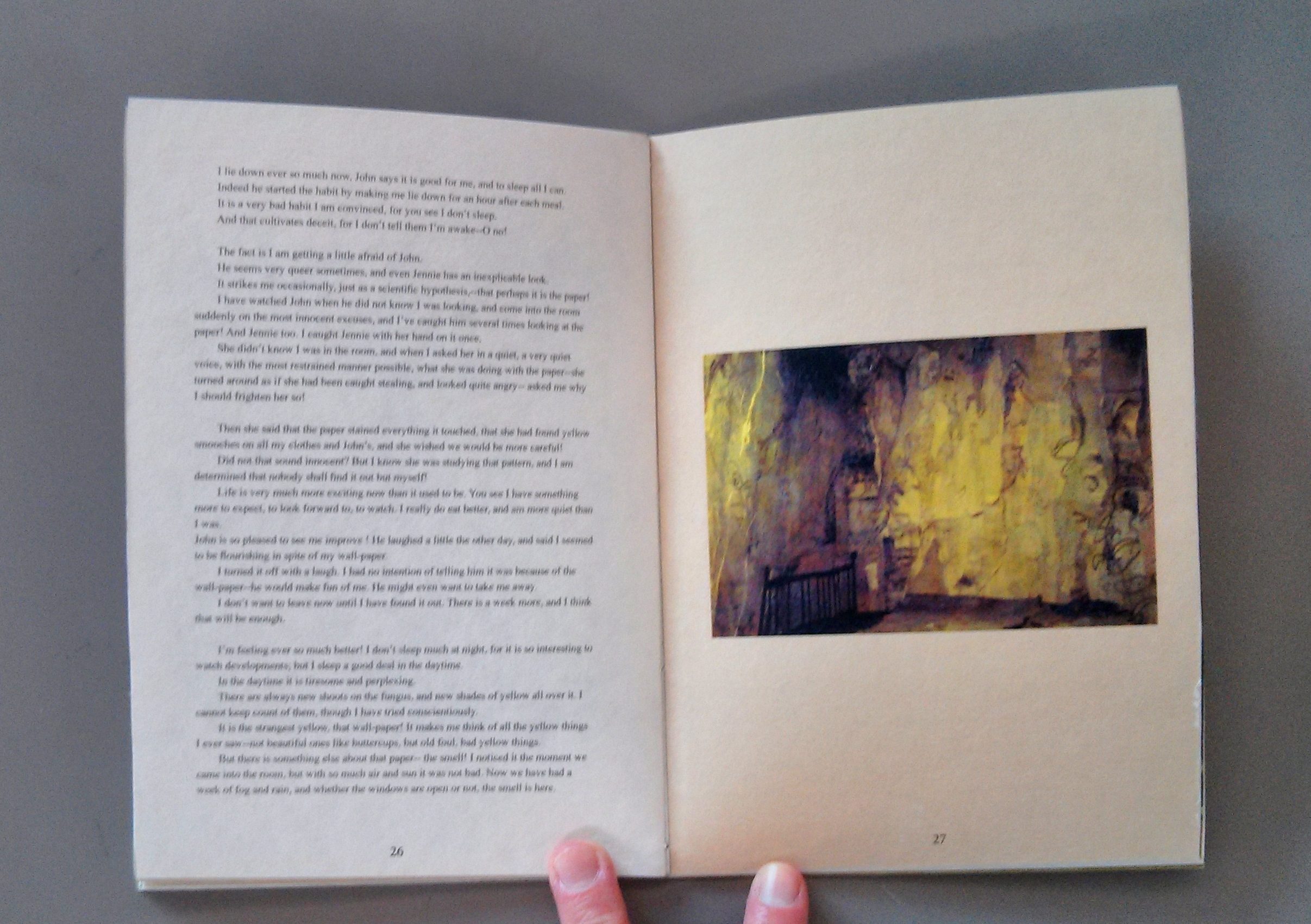 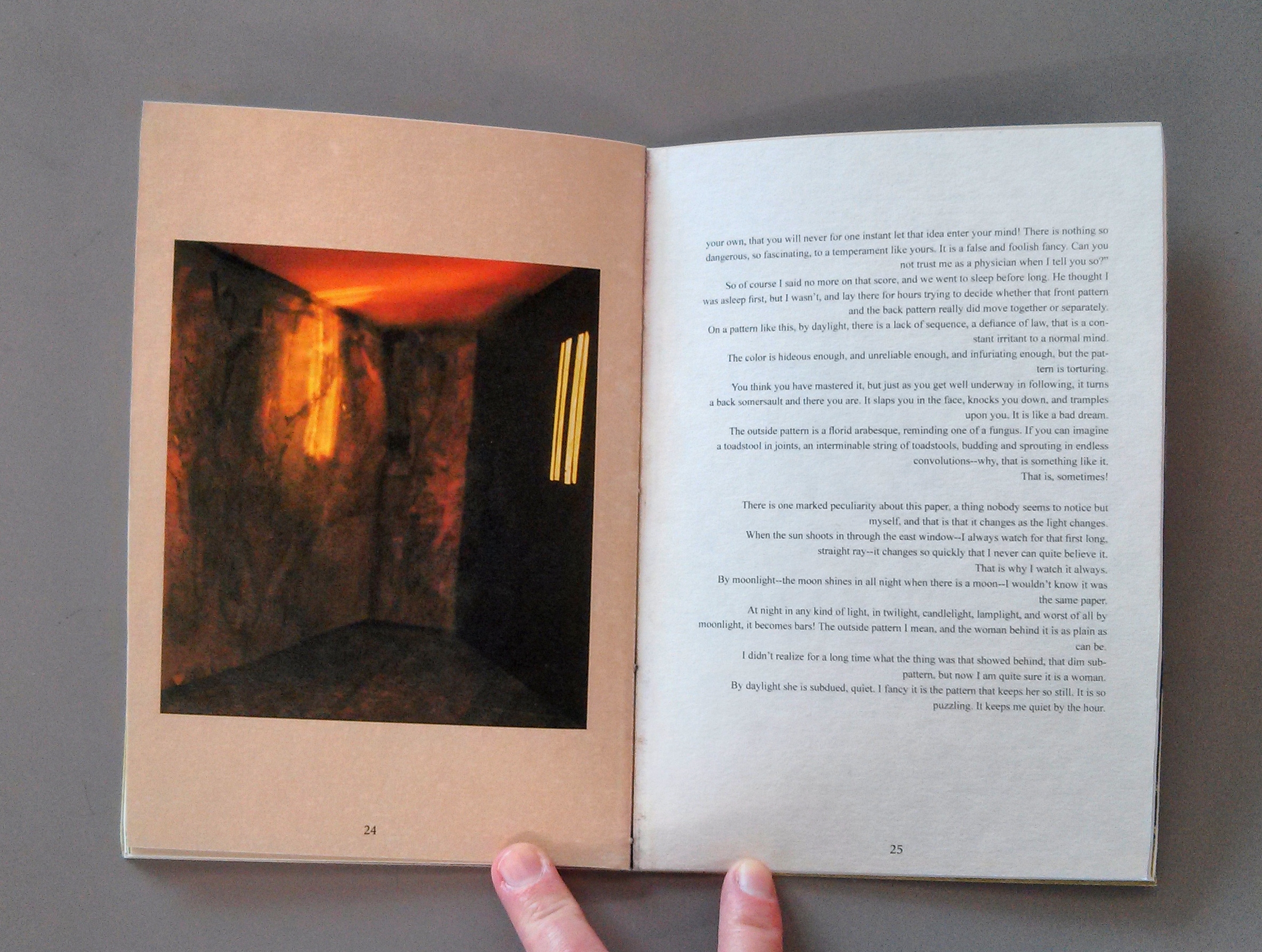 Above: A selection of photos of my book just before I handed in